How Money Became the Real Ball and Chain in My Marriage

When Gary and I were first married, we were young seminary students with very little money to our name. Unfortunately, I wanted to rework his fashion image. And since I proudly held “a single” credit card to a department store and because Gary needed some clothes, we went on a spending spree! 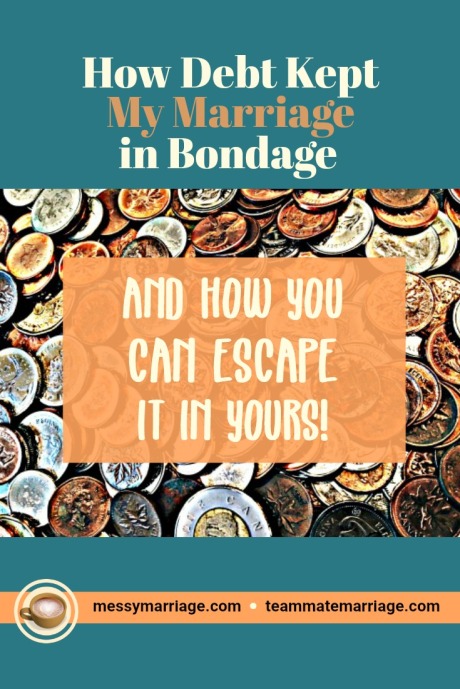 After all, we reasoned, we can manage the $10 minimum payment. So what if that takes us until our 10th anniversary to pay a pair of pants off?! 😉 After all, Gary needed clothes! #justificationanddenial

I remember that day like it was yesterday. We felt like two little kids right before Christmas, grabbing this shirt and charging that pair of pants.

Having so much power and freedom was exhilarating for two newlyweds and, for all intents and purposes, newly launched adults. I use that term very loosely here. 😉

The only problem with that plan was that our launch into adulthood was more like the launch of the Space Shuttle Challenger (For those not old enough to know—that launch ended in disaster, killing all aboard). 😦

What I’m trying to say is …

We made a fatal mistake that so many young couples (well, older couples too) make—let’s buy it now … on credit!

Over time this practice stayed with us—since debt tends to do that if you add to it faster than you pay it off.

So when the lean times came—and don’t kid yourself, they always do—we were in big trouble. Of course, as we went along, we wanted to add to our “adult life” a house, a nicer car, and over the span of six years, three children.

You could say we were baling water out of a boat that had a huge gaping hole, and then inviting our three beautiful tots, as well as our mortgage company into our sinking boat!

At some points—some ten years later—we wised up and sought out a financial advisor for budget advice. He gave us a plan to get out of debt. And in the span of about six years, we were able to pay off all of our credit card debt and eventually all other debt except for our home. Yes, that means that we don’t even have car loans! Yippee!

Now that’s what I call living like “two adults!”

Before I go any further, know that I’m not saying that this has been easy. Committing to going debt free has been very tough at times. We had to learn to give up the things we would like now with a view to the future—thinking, “Maybe someday we can afford that.”

With this future focus, we were able to remain on track. And when the final payment was made, it felt more fulfilling and free than that first moment of freedom we thought we were experiencing when we signed over our bank account to our credit card company.

I hope that you and your spouse are financially free. But if you’re not, and thinking it might be wise to investigate financial freedom, then check out this link: Crown FinancialMinistries. You can find your own free financial coach close to the area where you live through this ministry. That’s how we dug ourselves out and are so very grateful we did!

What has been an excuse you’ve used to justify spending on credit?

How have money and debt issues caused trouble in your marriage now or in the past?

Please tell me we weren’t the only ones stupid enough to get in this marriage jam! 😉