On the Palm of My Hand 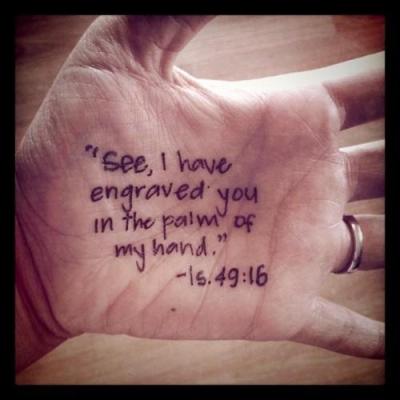 Accepting the news that your child has a disability is preceded by many, many grief steps and emotional adjustments.

You deny, then you try to fix, then you put on the battle armor of defensiveness that covers everything but the chip on your shoulder.

We want to protect and nurture our children, and, as Christ Followers, teach them about the Living God.

As the mom of a Neurotypical little girl, I took her to church and children’s ministry events; I sang worship songs and made sure she had Bible memory songs on CD; She went to a private Christian School where in second grade she accepted Jesus Christ as her personal Savior.

I was so thankful and so proud. No matter what obstacles stood in the way throughout her life, she had Jesus. Whatever doubts she may face, or hurts she may endure, her foundation is secure.

As the mom of an autistic son, I took him to church and children’s ministry events (DISASTER!), I sang worship songs and made sure he had Bible memory songs on CD (He covered his ears and screamed).

I realized that any private faith-based education options would not be open to him, nor would homeschooling meet his needs.

How would my son ever learn to accept Jesus as his personal Savior?

In his world full of concrete routines and endless therapies, how can the abstract concept of FAITH penetrate a mind that would only accept absolutes?

I cried and I prayed and I found myself secretly hoping that God had a disclaimer or exception for people like my son. That since he really couldn’t understand the Gospel of Jesus, God would claim Him as His own anyway.

Through the years, he has had so many accomplishments, and my perspective on Autism has changed so much.

His diagnosis was not this cross I had to bear to develop character, but a gift designed and crafted perfectly for him by a generous God who wants and made my child for His own.

Despite protests, we continued to pray as a family at meals, where he would often cover his ears and run away from the table. We would try to talk to him about who Jesus was in a way we hoped he would understand, though he would yell that there was no such thing as God.

We told him that God loved him anyway.

One particularly emotionally stressful evening, after fielding calls from family in different parts of the country where my husband and I each had a parent in the hospital, I found both of my children in the living room. I was making a pathetic attempt to maintain my “just fine” mask and immediately began babbling away about helping one of them with a computer game, when my beautiful Neurotypical, “Sister in Christ,” daughter said …

“Mom, Stop!” … and told me how her brother wanted to believe in Jesus.

I was stunned and sat next to him while he told me how he felt like God had written him a letter on the palm of his hand (weird….but okay…) and how he knew that Jesus loved him.

Since that day, prayer-time and talking about Jesus is initiated by a kid who wanted nothing to do with Him. I don’t know what happened or how. But I do know that on that summer evening my developmentally disabled child had an encounter with a Living God that changed him. He shares with other kids at school the Good News of the Christ he passionately denied existed.

I know that God is more than faithful when he has promised to “draw ALL men to Himself”… exactly as we are.

But honestly looking at who they are created to be, finding beauty in them, equipping them, and seeing God in them, so THEY can see God in themselves and share Him with the rest of the world.

Linking up with NOBH, Imperfect Prose, New Life Steward and To Love Honor and Vacuum

12 responses to “On the Palm of My Hand”